Forever Is A Pretty Long Time 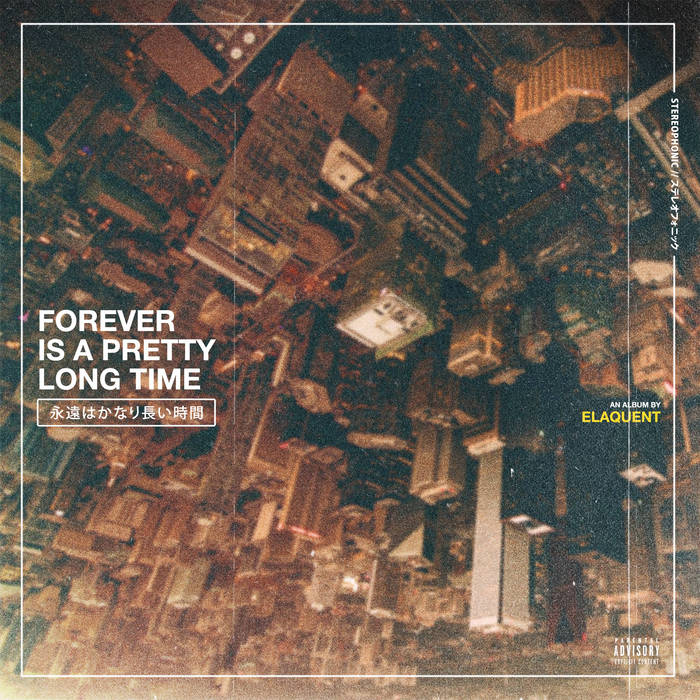 muzzybearr fantastic beats. fantastic features. what else can be expected from an eQ release?

Dutchyyy This jawn is ultra classic. The track title pretty much sums up the listening experience. lifted above the clouds, walking on air. Watson floats over one of my fav EQ beat's to date.
Favorite track: Airwalk (feat. Chester Watson).

The compilation album is a rite of passage for elite hip-hop producers. We rightfully revere the classics: Marley Marl’s In Control Vol. 1, Pete Rock’s Soul Survivor, Hi-Tek’s Hi-Teknology, J Dilla’s Welcome to Detroit, and The Neptunes’ Clones. Or in more recent years, the gems reaped from the Mello Music Cinematic Universe: Apollo Brown’s The Reset, Oddisee 101, and L’Orange’s The Ordinary Man. In that timeless lineage, you can add another one with Elaquent’s, Forever is a Pretty Long Time.

As with all brilliant producer compilation albums, the Guelph, Ontario-based Elaquent vividly constructs his own world. It’s the hip-hop equivalent of that old question: who would you want to invite to your dream dinner party if you had the chance? But instead, it’s the lab, and the visitors include a murderer’s row of underground MCs including Oddisee, Blu, Chester Watson, Cavalier, and Guilty Simpson. The curation is impeccable, but more than that, it creates its own orphic sense of magic. After all, art is closer to voodoo than science, and here, the rappers sound legitimately inspired by the productions. It’s an album possessed with smoke-wreathed jazz cool and urgent immediacy -- as though as soon as the artists heard the instrumentals, they immediately set pad to pen.

“I’ve always wanted to do this type of record, but it never felt right to do until now,” Elaquent explains. “Most of my instrumental albums would feature only one or two collaborations, and only then for a change of pace. But this time, I really wanted to challenge myself to do something a little different and showcase what I can do with a number of my favorite artists.”

From the onset, a mesmeric spell is cast. “Forever Intro” conjures familiar but distant chords of memory. A saxophone loop plays like you’d heard it in a Parisan jazz club in 1950, right around the time a young Miles Davis was seducing Juliette Greco. The lick curls like smoke rings before dissolving into the wine-dark night -- only to give way to Oddisee offering his “Guidelines.” The PG County legend deploys a liquid flow, his voice melodically climbing the scales like Spiderman to a skyscraper. He offers a confessional message of clear-headed meditative simplicity; while the beat stutters with ingenious syncopated rhythms, percussion clicks, and honey blue keys reminiscent of vintage Tribe Called Quest but updated for the 21st Century. It mixes Low End Theory with the residual influence of the legendary Los Angeles beat scene mecca of the same name.

There is the angelic levitation of the Chester Watson-buoyed “Airwalk.” The young monotone samurai ponders the wrath of karma, Topanga Canyon versus Beverly Hills, and the eternal question of whether time is moving too fast, or if it’s merely our perception. Behind the boards, Elaquent is masterful, offering rugged drums and gorgeous spliff-lit jazz pianos -- a new alchemy of smoked out soul. “Thread Count” brings the gruff tuba slap of Guilty Simpson, who works in tandem with the beat, his voice another rich instrument in a dazzling composition.

Across the entire album, the beats breathe and sparkle, carried by their own swirling iridescent tsunami swing. The entirely instrumental “Jollof,” takes its nomenclatural inspiration from the West African rice dish, and manages to pull off the same trick that DOOM did on Mm..Food, in which somehow the beats taste sumptuous. While on “Chase the Light,” the collision of Elaquent and Cavalier conjures memories of the chemistry between Dilla and Common circa Like Water for Chocolate. While “Time” introduces Lost Like Alex to the wider hip-hop consciousness, a guest turn that threatens to steal the album from the legendary underground roster that Elaquent assembled.

It all fades out in a sunburst of color with “Vices,” the finale that rides on a pitched down and distorted flip of “Electric Relaxation.” Seamlessly and rightfully tying himself into the extended Native Tongues ancestry, Elaquent offers one last reminder of his gift. This time, it’s just the producer and the stage, the atmosphere warm and aromatic but full of mystery, the vocals faded just right, the drums that would sound just right inside the basement of the Village Vanguard. Music that feels alive, but more importantly, music that can live forever.

Canadian Producer, Elaquent has been an integral part of the beat scene for the last decade.

Bandcamp Daily  your guide to the world of Bandcamp

Featuring appearances from Kari Faux, Bluestaeb and and interview with NY-bred artist Wiki